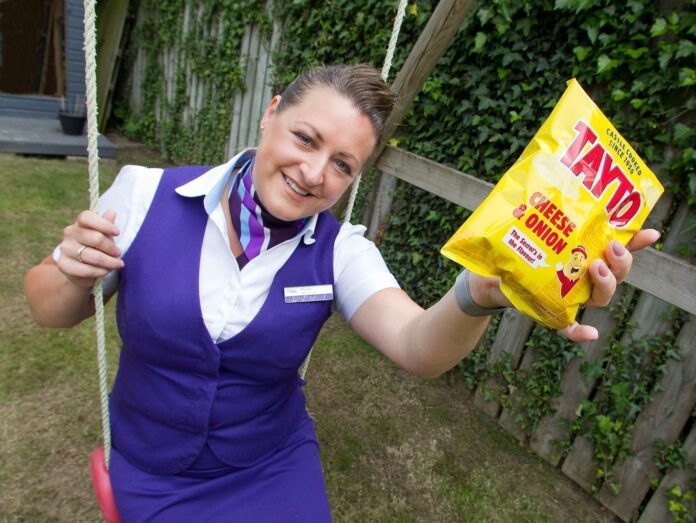 A campaign to help save the jobs of former Flybe staff has taken flight across the internet, thanks to the efforts of a determined Bangor woman.

Nearly three months after Nicola Jansen van Rensburg and her Flybe colleagues lost their jobs, the out of work aviation staff are calling on local politicians and Stormont to help save their jobs.

In a bid to highlight their plight amidst the current Covid-19 crisis, Nicola was inspired by the ‘Don’t Rush Challenge’ internet phenomenon that has swept across the globe.

Alongside 46 of her former colleagues, in a short youtube video the avaiation staff are seen to change seamlessly from their uniforms into their civilian clothes – as they pass a bag of Tayto crips to each other.

A flight attendant for 22 years, Nicola said, “The video puts faces to the statistics of lost jobs, to show that we were a team.”

Nicola was also delighted to have the support of Belfast actor Packy Lee who plays Johnny Dogs in the hit drama series Peaky Blinders who stars in the video.

Said Nicola, “Packy would have flown with us quite a lot and he is keen to support us, to keep Belfast connected. Other airlines may come in to the City Airport but that doesn’t create jobs or stability for us.

“It helps the passengers but we need connectivity with the rest of the United Kingdom and jobs.”

Nicola explained, “The message that we need to get out is that we need a base, we need regional flights. Lots of people are now stranded, they can’t get to Leeds or Cardiff.

“We also used to do a lot of medical flights with organ transfers, as well as flying specialists for operations, that can’t be done any more.”

Nicola was amongst the Flybe workers from Northern Ireland who lost their jobs when the company collapsed back in March, and she took part in their protest to Stormont earlier this year.

The collapse of Europe’s biggest regional airline brought to an end its services into and out of Belfast City Airport.

Pilots and cabin crew staff stood outside parliament buildings earlier this year in their airline uniforms. The protest came as Eastern Airways announced it would take over the Southampton route.

It was one of the routes that was operated by Flybe until it went into administration and was the third former Flybe service which has been replaced at the airport. Loganair has taken over the Aberdeen and Inverness flights.

In total Flybe operated 14 routes from Belfast City Airport and 80% of its scheduled flights.

Nicola recalled the day Flybe collapsed saying, “We all thought we were being bought over by Virgin Connect, we were going for Virgin Connect training and we though we were finally being saved.

“Then when we flew into Belfast City at 9pm when I looked for my rosta to see when I was next working, it was not there.”

Nicola said that making the video has been a welcome boost for all their morale. “There were 46 of us from all over Northern Ireland. I wanted to create memories at a time when everything is so negative and I wanted the public to know that we need jobs.”