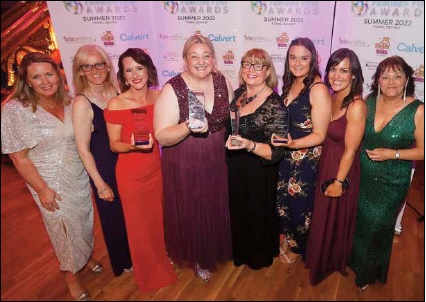 AS it celebrates the 80th anniversary of its nursery unit and prepares for formal transformation as an integrated school, Bangor Central and its staff have won a number of awards. At the Families First NI Summer Awards ceremony at Titanic Belfast on June 11, Bangor Central were nominated in four categories, and won awards in each, including the top prize for Best Pre-School.

Christine McCullough, the school’s secretary, won the award for Best School Support Staff. Each nomination was supported by parents’ votes and supporting comments. Emma Hales whose daughter currently attends the school said: “Christine is one of the main reasons Bangor Central Nursery is such a wonderful place. She goes above and beyond for everyone and has been so helpful to us as a new family in the area.” Deirdre Martin, who is retiring from the school at the end of August, was recognised with a Gold Star Award for Outstanding Services to Education.

Parent Elaine Johnston commented: “Miss Martin was my first daughter’s nursery school teacher, her kind and fun nature helped my daughter settle into nursery and her first time being away from family. My daughter Annabella loved her nursery year and learnt so much. From time to time we still see Miss Martin and she always gives us a warm smile and a wave. We wish her all the best for her retirement, she will be dearly missed and is so deserving of this gold star award.” The newest member of the teaching staff to the school, Brooke Hanna, was also recognised in the Families First Awards, coming Highly Commended in the category of Best Newcomer Teacher.

Judith Fox, a current parent, supported the nomination stating: “Miss Hanna is like a storybook teacher; textbook meets fairytale – she has a heart for the children and their families, she listens and shares in their highs and lows, and they are delighted to see her at the gate each day. She’s got a bright future ahead of her in education.” The highlight of the Families First Awards night for Bangor Central Nursery School was winning the award for Best Pre School.

The award, principal Pamela Algie said: “It is a lovely recognition for the whole school team; their continued hard work and dedication, particularly over a challenging three years which have been so impacted by Covid.” The nomination for the Best Pre-School award was overwhelmingly supported by parents both past and present; Chris Woolridge commented: “Our son has had a fantastic time in preschool, the amazing staff, the experiences – social, educational and just the enjoyable ones, the facilities both indoors and out. I couldn’t have wished for better and can say it has been the best start to education I could have hoped for.” The nomination was also welcomed by the Board of Governors of the nursery. Current governor, Joanne Dunne said: “Bangor Central Nursery School is an outstanding nursery school which has an excellent reputation within the community.

The school provides a safe, nurturing environment for the children whilst developing every child. Children and their families are at the heart of everything the school does and the principal, Miss Algie, has an amazing vision for the nursery. The nursery provides amazing opportunities for the children such as fundamental movement sessions, yoga, forest schools, ensuring all children’s needs and interests are catered for.”